Share
The adult fungus gnat is a small black fly, about 3-4 mm in length. They are commonly seen swarming in greenhouses because they are attracted by the humidity, high temperatures and decomposing organic matter. Crop substrates offer ideal conditions for their larvae, which are white and legless, resembling small worms. They feed on organic matter and the tender parts of plants below the ground, such as roots, as well as the stems.

About the pest in brief

What are fungus gnats?
Fungus gnats (families Mycetophilidae and Sciaridae) are a common pest affecting indoor plants, especially where humidity and moisture levels are high.

What can you see?
They’re usually first noticed when the harmless adults are seen flying around house plants or gathered at a nearby window.

What can you do?
Make sure that air is circulating over the top of your soil and water your plants properly.

Adults live about one week and lay up to 300 eggs in rich, moist soils. Within 4-6 days tiny larvae emerge and begin feeding on plant roots during their two week lives. The pupal stage lasts 3-4 days before young adults leave the soil and begin the next generation. The entire life cycle from egg to adult may be completed in as little as 3-4 weeks depending on the temperature. Because of their proclivity and relative short gestation period, potted plants can host each stage — egg, larvae, pupae, adult — with multiple generations at once. Because of this remedies usually require repeated applications until there are no surviving eggs. 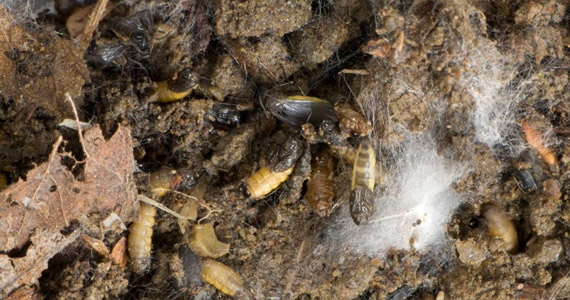 Symptoms of the pest

Plant symptoms that indicate fungal gnats are sudden wilting, loss of vigour, poor growth, and yellowing of the leaves. With severe infestations, a considerable portion of the plants may be lost.

How to prevent the pest? 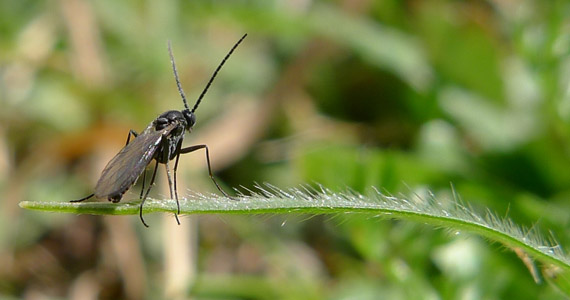 Solutions for controlling the pest